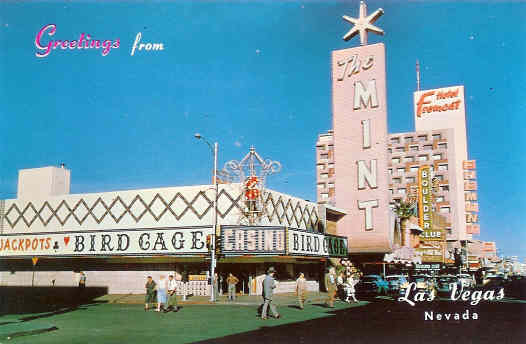 As you know, I’ve been known to hang around casinos – around, and around, and around. Well, the other day a security officer was bringing a fill of chips to the “21” table I was standing next to and a woman asked what, “that plastic thingy, that, you know, holder thing, was called.”

I explained that the officer brought the chips in racks, and the racks went in the holder so casino personnel could see the chips, but the officer couldn’t get to them, except when he got to the table and took the lid off the birdcage.

The woman then laughed at my name for the “thingy,” because that was such a silly name. The officer refused to acknowledge the chip holder was sometimes called a birdcage. So, there I was, looked on with what can only be described now as scorn and mistrust (like when I talk to my banker).

Anyway, my use of the vernacular birdcage was accurate, and as somebody who has spent more than enough time in casinos, let me say that a casino certainly has its own language. If you don’t believe that, read Stealing From Bandits.

For instance, when you throw a player out, you 86’em, much like a restaurant’s kitchen will say 86′ the pork chops because they are old or smell like shoe leather, which most pork chops do. And, since we are on the subject, most people thrown out of casinos are drunk – and smell worse than shoe leather.

At any rate, another gaming item called a birdcage is the chuck-a-luck dice holder. Now chuck-a-luck used to be quite popular, but when’s the last time you saw this game in action? The game was easy, and a good dealer would tell you that the dice-cage (or birdcage) held three dice, and you could bet on any single number of 1,2,3,4,5 or 6, and get even money. If the dice came up 1, 2 and 3, the dealer paid those and took the bets from 4, 5 and 6. No house edge, right?

Well, hotels are built on profits, but chuck-a-luck has gone the way of the do-do bird because the house edge was way too high. You see, when the dice came us with a pair or trips, the house only had to pay one bet – all the other numbers lost. For what it’s worth, of the 216 dice combinations, you can make a set six times and a pair 90 times, so the house used to win 108 times out of 216 (average) spins of the cage……..yikes.

As for the birdcage, there was a club in downtown Las Vegas at the corner of First and Fremont that had a ten-foot high birdcage with three-foot red dice inside it, which was fitting, since the club was called the Bird Cage. The gaming downtown was different than down on The Strip, and people likeHoward Hughes never owned any clubs there.

However, I didn’t come to talk about the Bird Cage – I wanted to talk about a fancy souvenir from the club that was only open at 100 East Fremont from 1958 to 1959, and that’s their $5 chip.

The chip was made by a great old guy named Richard Taylor. Mr. Taylor’s brother and his partner, Leo, started a little chip and dice company in 1939 and called it T-K Specialty. They made a few sales, but Leo decided the conditions weren’t for him, so he split the gig, and Richard joined his brother and eventually became a partner.

Richard remembers selling dice at their Kansas City offices and delivering them to fancy illegal clubs down south like the Forest Club in Texas. “We drove up to the club’s gate and gave our names to the guards, who called up to the mansion to check on us. Eventually, they let us in.”

“It was the nicest place I had ever seen, and I had my first prime New York steak there, and it was all free, you couldn’t pay for a thing. They had a few roulette tables, and some 21 and slots. Those old slots may have been screwed down pretty tight, but they needed good dice for the craps games, and that’s what we brought them, some 300 pair.”

T-K Specialty made chips with a TK TK TK around the rim, and then about 1948, they came up with the horseshoe rim. And, finally, that’s the rim found on the chip I have from the Bird Cage. So, the rim-style started about 60-years ago – about the time I started this story (right?).

Anyway, a birdcage holds something beautiful that you want to see, but you don’t want just flying off – the same with that plastic chip carrier at the casino, and the same with the birdcage used for chuck-a-luck.

Did I mention that T-K Specialty made mostly dice? You see……

Thanks for reading – Al W. Moe.

One thought on “Casino Birdcage”