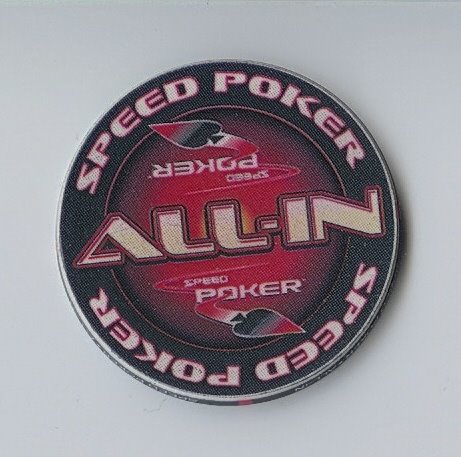 So, you have some one-of-a-kind chips? So do I. Well, not exactly, well, no, I don’t. However, I do have a few that have just a few cousins kicking around in drawers and collections.

One of them is the chip above. This is an over-sized variety 42 mm and has “SPEED POKER ALL-IN” on the rim.

This colorful chip is from the Poker Dome televised championship series circa 2006. I know this because it is the last chip I had left when I busted out of the poker tournament.

Mansion Poker put together this championship, by allowing players from all over the world to compete in online tournaments. I started with a $5 buy-in tournament and finished in the top ten, which got me an entry into the $100 buy-in tournament. In that tournament, only the winner got a seat at the Poker Dome.

The best part of the tournament structure was that Mansion gave the entry to the Poker Dome as a freebie, and players got to keep their tournament winnings. I pocketed about $3500 and the entry, and while my flight (with my wife) wasn’t from across the ocean, we still enjoyed the free airfare to Las Vegas.

Mansion had a limo available for use, and we were put up for a few days in a suite at Caesar’s Palace. They were also nice enough to pay for our meals, and to top it off, they gave me $500 in casino chips to play with. Good people.

The Poker Dome was built upstairs at a theater complex on Fremont Street, and the day of the tournament I arrived several hours before the filming was to start so all the contestants could learn the rules, get fitted for blood- pressure meters, and do some practice. We had a great time, and they supplied lunch, snacks, and drinks. Well, non-alcoholic drinks.

When it got close to time for filming, the Speed Poker crew got us ready, and that included makeup. I don’t know how you ladies put that stuff on every day. That was tough, but not as tough as the lights………..jeez those things were bright. I thought I would have permanent damage, I could just see myself on a street corner with my little cup of chips, err, pencils.

As for the tournament, each of the six contestants started with 50,000 in chips, and play continued until one player had all 300,000. I used my special ALL-IN chip to signify a hand I thought would win (A-9) – it did not.

My wife and I sat in the audience and watched the last couple players battle it out, and Zack Williamson eventually won. Then we got moved back to Caesar’s for a very nice meal in Nero’s restaurant. Since it was only about 9 PM, my wife suggested we play a little poker, so off to the poker room we went.

There was a tournament starting at 11 PM, and although I was tired, I love my wife, and she wanted to play, so …………….we both entered. She got bumped out about 1 AM, and I was still alive with chips at 5 AM when we got down to the final table, and who do you think was on this table?

That’s right, Zack, with his $25,000 check from the Poker Dome and another trip in a month to fight towards a million dollar first prize. At 6 AM, Zack and the remaining three of us agreed to split the prize money in Caesar’s tournament four ways, and although Zack had about half the chips, we split evenly – he’s a gentleman.

As luck would have it, my wife also played on Mansion, and she came in second-place two weeks later in a tournament and qualified as an alternate, so we headed back to Vegas. Although she didn’t get to play in the Poker Dome, we did get all the perks. What a great time we had.

There is no more Poker Dome, no more speed poker, and no more Mansion for me since they no longer allow US citizens to play. I do have this cool chip though, and even if it isn’t one-of-a-kind, I still like it.

There are more posts to come, I’m not ALL-IN. What have you got?

Thanks for reading – Al W. Moe

One thought on “Not One-of-a-kind, but Rare”