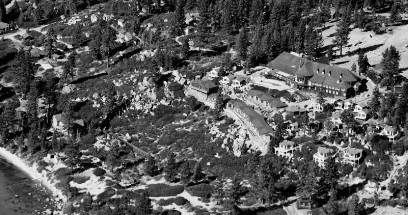 It’s been nearly 100 years since Robert Sherman gave his Cal-Neva cabin at Lake Tahoe’s North Shore to Norman Biltz, who leased it to Bill Doyle, who opened a little casino, who did well enough to convince Biltz to sell it to Bill Graham and James McKay. Yeah, that’s not even the beginning of the fun or the changing of hands.

Biltz pocketed $65,000 for his sale to Reno’s casino big shots. And that price included plenty of land around the club from the ring highway which was finished in 1929, down towards the lake itself, as shown in the photo.

Over the years, the Grand Old Dame of the Lake developed a spurious reputation with bribery, beatings, money laundering, and owners like Frank Sinatra and Mob figures. It was great.

For more photos and history from Lake Tahoe, consider Nevada’s Golden Age of Gambling which contains more than 70 great old photos – or take a look at this YouTube video.

A Touch of Magic and a Dash of Romance