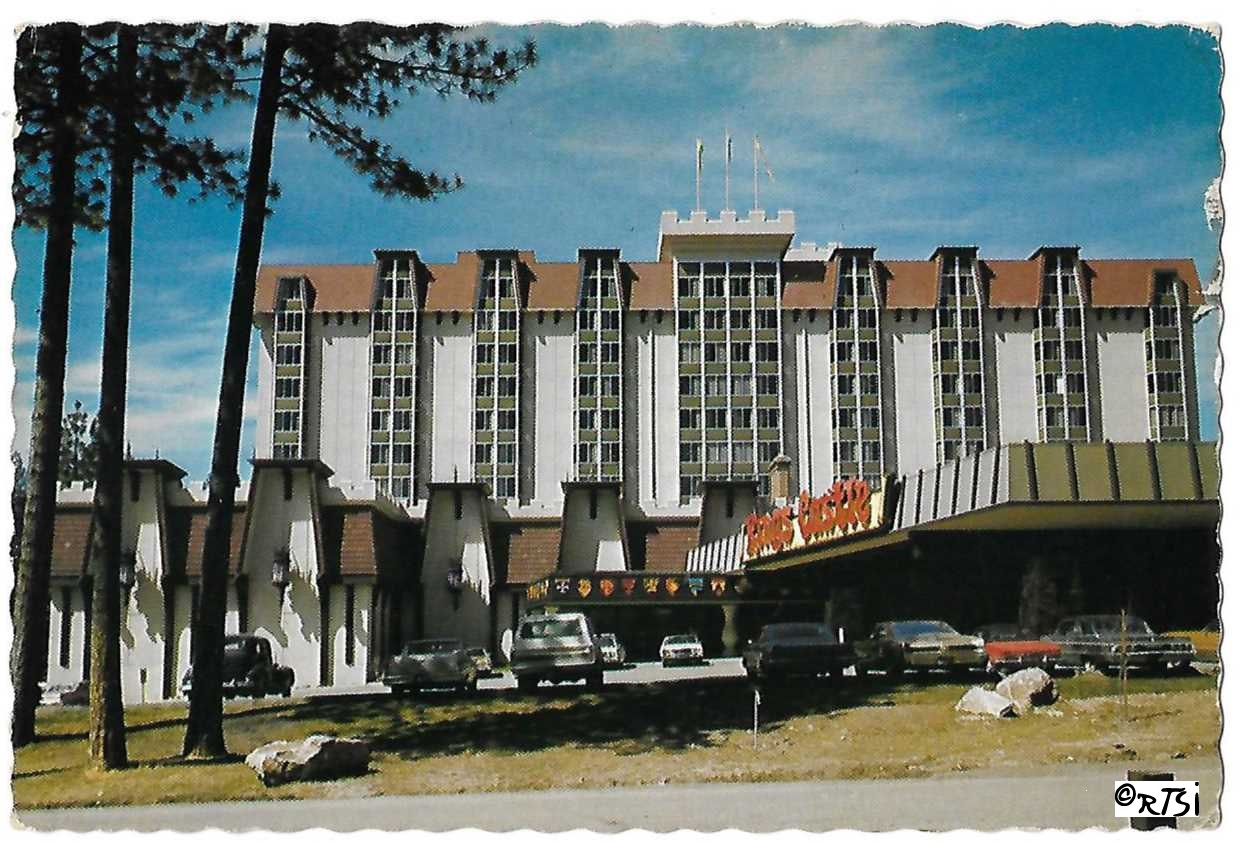 How’s this for a great shot from the early ’70s? This postcard is from Reno Tahoe Specialty, Inc.

His club at the lake ran into issues soon after taking a Teamsters loan to build the property, and they continued as the small casino struggled to get a foothold in a resort community that especially in the early 1970s was quite seasonal. When the snow flew, so did most of the tourists. Sure, there were skiers at Incline, but historically at both north and south shores of Lake Tahoe, the skiers were there to ski, not gamble.

Jacobson moved to the Lake from Las Vegas in 1968 after selling his Baltimore Bullets NBA basketball team, turning his insurance agency over to his sons, and leaving his job as President and CDO of Desert Palace, Inc. (Caesars Palace).

What Jacobson built at Incline Village was complete with medieval castle motif including walls, turrets and an indoor dinner theater named Camelot.  Outside, the grounds held a full-size Lady Godiva on a horse and four palace guards.

Who You Gonna Trust?

Unfortunately, real guards inside the casino were not as trustworthy as they might have been.  One problem leading to the casino’s closure in 1972 was a general lack of honesty.  Workers in several areas of the club were stealing from inside.  Two security guards even had keys to the drop boxes from the blackjack tables.  When the boxes went to the soft-count room in an elevator, the guards would help themselves to a few hundred dollars each night.  They got caught because one of them accidentally took a “fill-slip” along with his nightly cut.

When the club closed, 500 workers lost their jobs. The chips from the club went into the hands of several managers, one of whom was supposed to dump them in the lake. He didn’t make it there with all the chips, which is nice for collectors.

The club reopened in 1974 and lasted less than a year under Judd McIntosh.  Later, Jimmie Hume took charge of managing the club for a year or so until it was purchased by Hyatt Hotels in May of 1975.

Hyatt brought in Jack Hardy as general manager, and he oversaw the renovation and reopening of the property, and since that time, the club has been successfully run as the Hyatt Regency at Incline-Village.

26 thoughts on “The King’s Castle”

A Touch of Magic and a Dash of Romance