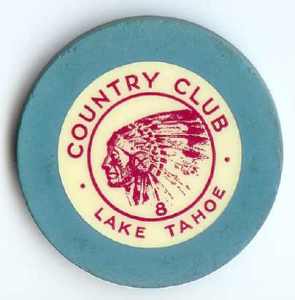 The Stateline Country Club was situated on the California/Nevada state border on the South Shore of Lake Tahoe.

Originally owned by Cal Custer, the club had a reputation for fun during the short summer season at the Lake before winter snowstorms closed the only link (highway 50) from the Placerville area of California and the Nevada side that lead to Carson City.

Nick Abelman purchased the small casino with his partners, Bert Riddick and Steve Pavlovich in 1933. This chip is from their early days at the club, although it may not have been on a table until 1935.

Abelman’s casino inside the Riverside Hotel – called the Riverside Buffet, also used crest and seal chips. His “Ship and Bottle” was one of the nicest casinos in Nevada used even more elaborate chips on their fancy tables.