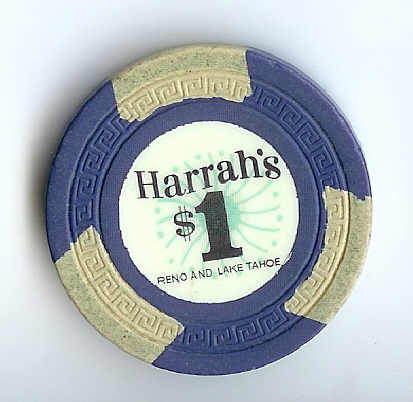 Next door to Barney’s at Lake Tahoe was Harrah’s Sports Casino. I walked in and was surprised by how small it was. There were about a dozen chairs for a keno game, several TV’s by the bar, a craps game, and half-a-dozen blackjack tables. They had little yellow signs with $1 to $100 on them. Who the hell would bet $100 at blackjack? Come on, this place didn’t even have a poker room.

What it did have, in plenty, was cocktail waitresses, each in little black and white striped shorts. They didn’t look like any ref’s I had ever seen before! Not that I noticed, I was looking for a poker game. When I looked some more, there still wasn’t a poker game, but the waitresses were still there. These apparently were a different species than at the Park Tahoe. These ladies all seemed to be about 5’2 with very short hair. They were in tennis shoes. I wasn’t interested in drinking and they weren’t interested in me, so I left.

Across the driveway towards the state line, underneath a statue of a Pony Express rider, I found a set of carpeted stairs leading through a double set of glass doors into Harrah’s. The real casino, the big one. Really! Over 1000 slot machines, sixty table games, a high-rise hotel with rooms too expensive for me, and a poker room.

Well, not so much a room as a roped-off area at the end of a pit with six tables. Excellent. I was experienced now, things would go better for me. Plus, I got a stack of chips from the podium guy and they were really cool. Better than the Park Tahoe. These were hard plastic with little brass inserts and Harrah’s name in the middle. The $5 chips were red, with just four inserts, but the same middle part, a little brass nameplate.

I played two hands before I realized it wasn’t 7-stud, it was 6-card stud. Well, no problem, I thought. I’m a smart guy, I can play with one less card. Apparently, however, I may have been playing with one less brain cell than my opponents who were more than happy to rake my chips into their stacks.

At least I didn’t smash my leg into the stupid drop-box this time, but I felt just as much pain as I limped away from the table. I headed towards the back of the casino, past the hotel elevators and the front desk, toward the light. Head for the light, I thought.

This time I left with just one chip, and no, it wasn’t the $5. I hit the parking lot and looked around. There were a lot of cars. I could see way far away into the Park Tahoe’s parking lot, and somewhere in that lot was my car. A 1970 Mustang with a Boss 302 engine. I had just made my last $105 monthly payment on it. Now I had money for poker.

Well, no, not really, but I was hooked. I walked back to my car and started it up. The double glass-pack mufflers thumped away, but my gold Mustang wouldn’t go toward Highway 50. It really wanted me to go back and play, so I spun a doughnut and drove the 200-yards back over to Harrah’s and went back along my previous route to the poker room.

They were just putting up a poster that announced a low ball tournament: $11 buy-in. I could afford that. I found a snack bar with $1.95 sandwiches and 50-cent sodas and became refreshed, just like the sign said I would. Then I wandered around until the tournament started, spending a total of $1 in nickles that drained through the polished-silver Pace slot machines with the Bar-Bar-Bar jackpots and bouncing yellow Genie’s.

I was assigned a seat and they handed out some old, obsolete Harrah’s chips. Most had been drilled, but the one-dollar chips were still nice. When we hit the first break in the tournament I was still alive, and they said we were going to “race for the one dollar chips,” but it was too late for mine. I had already pocketed the three I had left.

At the final table they colored-up our chips again and broke out some white $100 chips – no drill holes, but I never got a chance to get one to my pocket because we had to let everybody know how many we had and besides, I was afraid I might not win if I took a whole $100.

I didn’t win anyway, but I did get paid, and they also gave me a couple tickets to see the Captain and Tennille show in the South Shore Room. I didn’t have anybody to go with, so I gave them to the guy who came in third. I’m a nice guy. Who knew just one of those obsolete $100 chips would someday be worth more than the prize money I did win?

One thought on “Harrah’s 30-years Ago”

Our Journey to Simple Living